Vette-on-the-roof rolls on at Valenti Classics 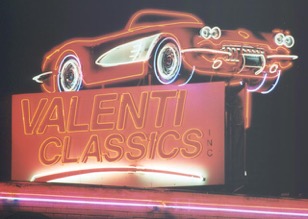 A well-known collector car dealership thrives on I-94 in the town of Caledonia where thousands of people traveling between Milwaukee and Chicago pass by every day. To help bring some of those people in the door a Corvette body was mounted on the roof of his store. Of course, he always had a few Corvettes in inventory, too. The car store is owned by Steve and Don Valenti, who have immortalized the dealership’s ‘Vette-on-the-roof identity with a neon Corvette sculpture that brings even more motorists off the Interstate.

“Back in 1961, my father worked at Nickey Chevrolet and purchased a brand-new Corvette,” says Valenti. “After he sold that car, he yearned to have another one. A few years later, when I was 16 years old, we found a ‘61 Corvette in need of restoration and decided to do a father-and-son project. We trailered the Corvette to our house and started a restoration.”

Once completed the car was shown at the Chevy Vettefest (www.chevyvettefest.net) where it took a “Gold Spinner” Award. This eventually led to Steve and his dad starting Valenti Classics, Inc. (www.valenticlassics.com). Today their once-upon-a-time hobby has become a multimillion dollar international business that has been going strong for 16 years.

What’s Steve’s secret to weathering a rough economy? “With our amazing staff and many years of combined experience, we find and sell only the highest-quality collector cars,” he says.