Valenti Classics Restores Vintage Cars for Clients Around the World

Franklin — Don Valenti and his son Steve restored the gleaming red 1961 Corvette about 25 years ago as nothing more than a hobby, with no intention of selling it and no notion that when they did so, they were embarking on a joy ride across the global economy.

They completed that first restoration job in the early 1990s, and the early clientele for the garage where the self-taught mechanics began overhauling vintage cars was almost exclusively local. 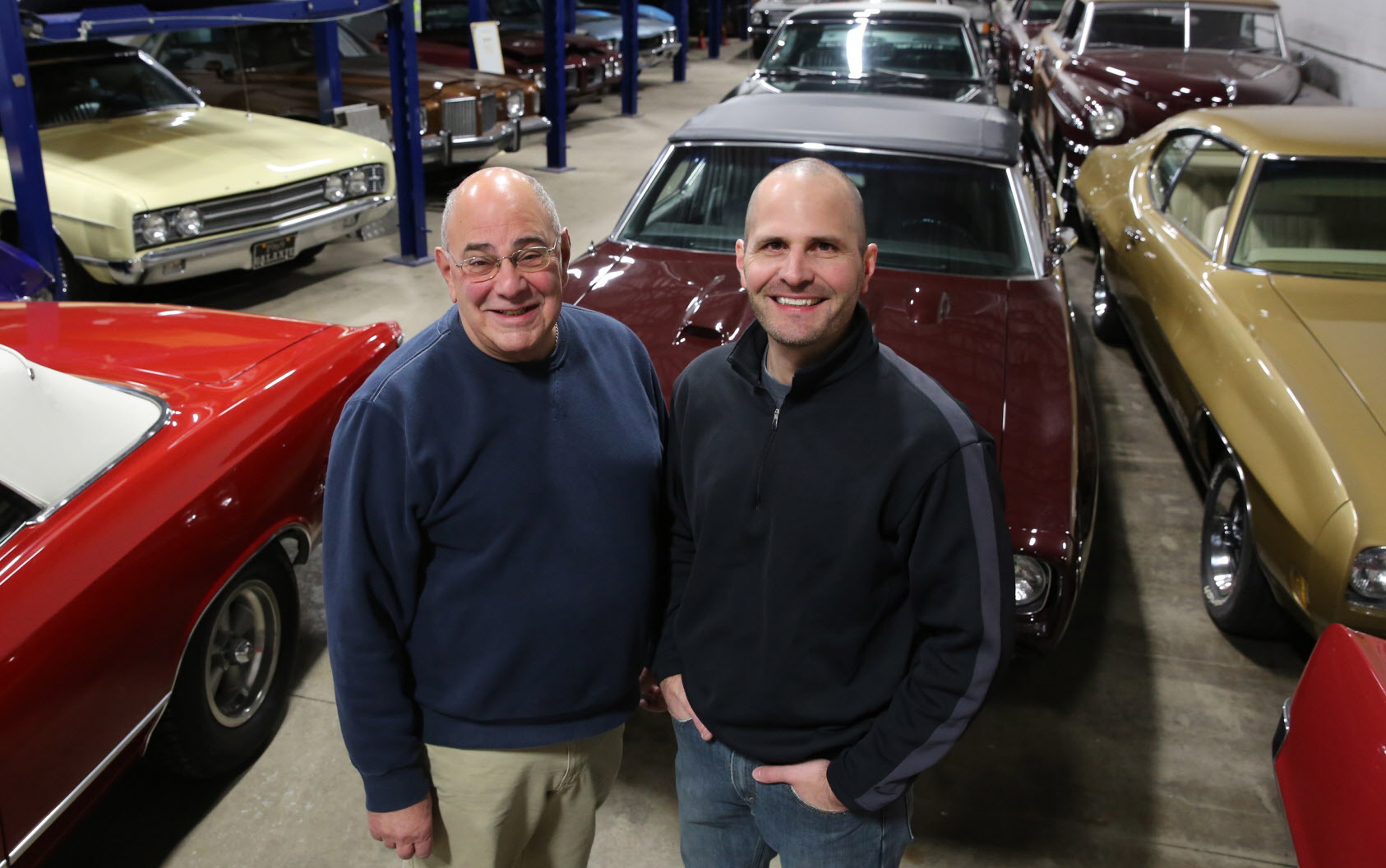 Then along came the Internet.

For the first time, an enthusiast in the African Republic of Benin could track down Valenti Classics Inc. in metro Milwaukee and see if they could find a 1918 Ford Model-T, restore it to its original performance, give it a shiny black paint job, redo the upholstery, and ship it to Africa.

For a gearhead in Bahrain, the Valenti’s resurrected a curvy 1967 Chevy coupe. In Saudi Arabia, there’s a fully refurbished blue ’52 Ford F-1 pickup racing around. A collector in Spain ordered a burgundy ’35 Cadillac with an imposing grille and bug-eye headlamps. Another in Brazil took possession of a ’37 Caddy.

As much as globalization has disrupted the lives of many Midwestern machinists and mechanics, it opened a world of far-flung destinations to Valenti Classics for the likes of Packards, Bentleys, Studebakers, Excaliburs and no end of muscle cars from the 1970s.

“From my perspective, it happened by accident,” said Don, 72.

During the garage’s early years, Don said, 95% of its clientele was from around Chicago and Milwaukee. These days, 95% of its business is either national or international.

Amid the classic car memorabilia in their office, they hung a global pin map. It shows 34 nations where they’ve delivered their automotive makeovers, covering every continent except Antarctica, and every U.S. state save Alaska.

“It’s hard to believe that our hobby has turned into a multimillion-dollar international business,” the once-amateur mechanics wrote on their sepia-toned webpage, which is dripping with stylized nostalgia.

The Valentis were living in Chicago when they launched their father-son start-up, but moved to Wisconsin in 1994 when they had a chance to purchase a showroom in Caledonia that had a red Corvette mounted on a rooftop pedestal, one that by coincidence resembled their maiden restoration model.

At the time, it was the best visibility at their disposal: The rooftop Corvette, trimmed on all sides in red and white neon that glowed at night, was visible from Interstate 94. A retired offensive lineman from the Green Bay Packers once saw it and stopped in, taking home a maroon, four-speed 1966 Dodge Charger. He later came back for a 1969 Plymouth Road Runner.

Their customers come from all corners of the planet. But what many have in common — apart from the means to justify buying cars that climb into the six figures — is a quest to recapture the dreams of their youth.

The Valentis decline to identify their customers, though: “A lot of celebrities and athletes don’t like their names used,” Don said.

For an Australian couple, the dream car was a custom-restored 1966 Ford Thunderbird. They flew to Milwaukee to pick it up and then drove the length of U.S. Route 66, one of the nation’s oldest highways, before having the car shipped home to Australia in a 20-foot steel container — which is how many of the Valenti Classics go abroad.

A collector in Singapore wanted the exact 1962 Ferrari 250 GTO used in the 2001 movie “Vanilla Sky,” starring Tom Cruise and Penelope Cruz. Valenti acquired it, reconditioned it and shipped it off to Asia.

Don recalls how an NBA player needed to have the seat of a car rebuilt to fit long-legged drivers. Another soft-spoken customer, known to the company initially only from a handful of phone calls, ordered a 1968 Oldsmobile 442 w30, a rare two-door muscle car, and turned out to be the owner of a National Football League team.

Wherever they come from, they keep the Valenti garage busy.

The company outgrew the Caledonia facility and recently moved to larger workshops in the Milwaukee suburb of Franklin. It has a full-time staff of 10 with diverse skills, including metal fabricators, machinists, body work specialists, electricians, mechanics and two with the artistry to draw color illustrations showing what the cars will look like after they are rebuilt and repainted.

“The only reason we have only 10 here is because you can’t find 20 who are qualified,” Don said.

The work often entails automotive archaeology. They search for old cars and parts at auctions, in forgotten barns, junkyards and online. And when parts no longer exist, they fabricate them in the shop. On a recent visit, one of the workshops included two 1956 Chrysler Imperials — one being fully restored and the other a “donor” car to salvage parts.

“Everyone here is a car nut,” Steve said.

And now the Franklin facility is at capacity. It’s impossible to walk in a straight line from one wing of the workshops to another. With dozens of projects in different stages of completion, many are stacked on hydraulic parking racks to optimize space.

Don and Steve recently purchased additional industrial space nearby, which will become their color and design studio, focusing on the exterior body work while the existing workshops will concentrate on internal mechanics and machining.

To be sure, there are hundreds of dealerships offering high-priced old cars. But like any other class of used car dealers, Steve cautions that many are all too willing to sell “auction queens” — the collector car equivalent of a lemon, dripping with curb appeal that disguises faulty wiring, broken brake lights or safety issues like lousy suspension or engines with cylinders that misfire. “Lipstick on a pig,” disses Steve.

Touting a 200-point safety inspection process, the Valentis claim all their cars are fully roadworthy.

About half their orders involve the resurrection of a classic car with all or most of the original factory parts, as if it just came off the showroom floor. The oldest they’ve refurbished is a 1913 Hupmobile, a model from Detroit’s Hupp Motor Co. that ceased production in 1940.

The other half of their work incorporates as many high-performance advancements as possible: retrofitting new drivetrains, steering, suspension, digital gauges and power windows while keeping all the vintage styling of the original. Such combinations of restoration and modernization have a name, “resto-mods,” and might cost as much as a yacht.

When they aren’t thinking about car engines, the Valentis think about search engines.

They know their web presence, valenticlassics.com, amounts to a global showroom. So, they routinely upgrade the site with “metatags” and other digital tricks to ensure they are easy to find on the web.

When potential customers land on the site, they’re greeted by all the nostalgic look-and-feel the Valentis could dream up with their web designer. There’s no substitute for walking into a showroom, Steve says, “so the idea with the website is to transport people back in time.”

So digital visitors can gawk at cool old cars, there’s a vintage 1960s-era TV screen that shows footage of their models. And for those who visit the site while at work, it’s good to put on headphones.

The site is noisy by design. It broadcasts postwar radio ads, including a campaign jingle from Dwight Eisenhower’s 1952 campaign (“Bring out the banner and bring out the drum, we’ll take Ike to Washington”).

The ads come between a continuous set of rock classics from the Youngbloods (“Everybody get together, try to love one another”) in the 1960s to Jackson Browne’s open-road anthem of the 1970s (“Looking out at the road rushing under my wheels, looking back at the years gone by”).

John Schmid covers economics and globalization through a Wisconsin perspective. Before joining the Journal Sentinel, he covered economics in Europe following the fall of the Berlin Wall. 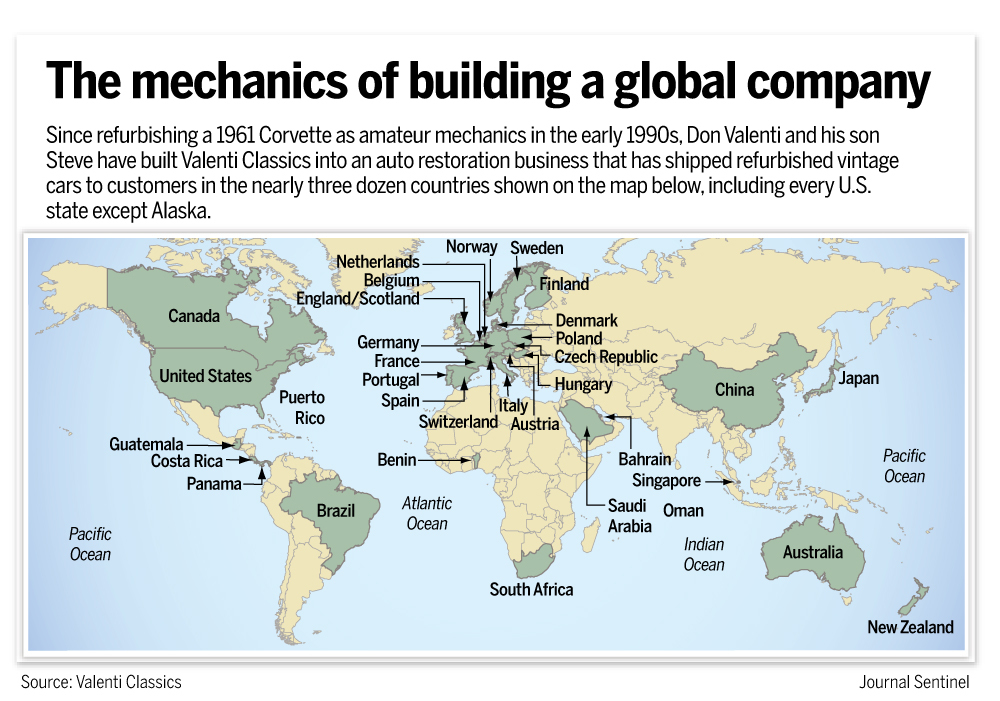