This year 620 WTMJ has teamed up Valenti Classics who will take their car to the next level. Starting Friday May 17 through Saturday July 27, they will display the car at live broadcast events. At each stop, they’ll qualify a 620 WTMJ listener for their chance to win the car. On Tuesday July 30, one of the qualifiers will drive off in the 1961 Ford Thunderbird!

Check out 620wtmj.com for more information.

ABOUT THE CLASSIC FREE RIDE 1961 THUNDERBIRD:

Ford introduced their third generation Thunderbird in 1961 and were quickly given the nickname ‘Bullet Bird.’ The cars nickname evolved from its pointed nose, a very symmetrical shape, round taillights inspired by a jet engine, modest fins, and projectile inspired lines. The styling reflected the era in which it was hatched; the early 1960s was the Space Age and the concerns over the Cold War. This third-generation bird no doubt took its creative styling cues from rocket ships and air bound projectiles. The restyling was completely new for 1961 and they were longer, lower and wider than previous year’s model. The 1961 Thunderbird introduced several firsts for the automotive market. The most distinctive feature was the highly touted ‘swing away’ steering wheel and the floating rear view mirror, which is now common on all autos produced today.

The 1961 Thunderbird was given the honor of serving as the pace car for the Indianapolis 500. President-elect John F. Kennedy in his inaugural procession used fifty Thunderbirds. The public also agreed with the vehicles styling as it proved to be a tremendous success in its first year.

This car is fitted with an overhead valve V8 engine with four-barrel carburetor and a displacement size of 390 cubic-inches producing 300 horsepower. It is finished in Black with a Beige colored interior and has traveled only 37,794 miles since leaving the factory with only one repaint done in the 80’s. Valenti Classics has treated this car with its full spectrum of services, which included preservation, restoration and customization. Preservation consisted of retaining the original interior, original factory applied paint in the doorjambs, underside of hood and trunk as well as carefully preserving the existing paint finish. The restoration aspect of this project included straightening and polishing all of the stainless trim, re-chroming the bumpers, rebuilding the power steering pump, passenger door latch mechanism, radiator, all new hoses and belts, proper hose clamps, a new fuel tank and fuel sending unit, the engine was dismantled for inspection, service, detailing and new gaskets and seals installed. After careful research we painted the engine components back to the factory colors, chemically stripped all engine hardware, brackets, hinges, latches, etc. and plated them the appropriate finish. The under-hood insulation was also replaced with the proper material, new carpet set with proper loop was installed and correct reproduction sill plates were fitted. Finally comes the cool customization which starts off with a performance carburetor, new modified exhaust system with Flowmaster mufflers and turn down exhaust tips, four-wheel Power Disc Brake conversion featuring drilled and slotted rotors, One of a kind “Daytona” 17” Chrome wheels and Dunlop Signature low profile Radial Tires. This Thunderbird was purchased new on 5/15/1961 and the original owner pampered this spectacular car until the day he sold it on 10/6/1988. In the 27 years this owner had the car it was driven only 37,655 miles. The dealer who acquired the Bird from the original owner was so impressed with it that they kept it in their personal collection until Valenti Classics, Inc. acquired it in 2013. 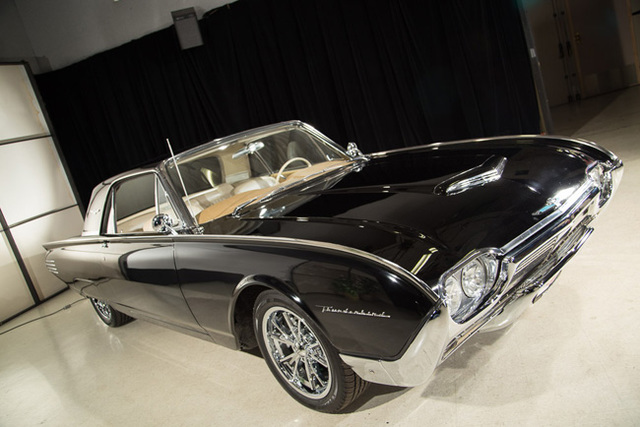